The ACRL-Oregon Award for Excellence is given annually for a project or initiative, undertaken by an individual or a group, that has significantly improved Oregon academic libraries or librarianship. 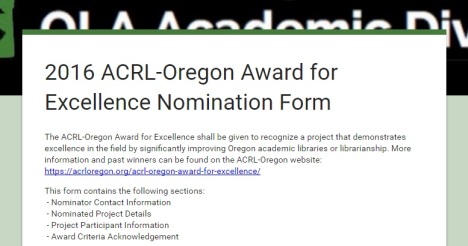 Who can be nominated:

Any project or initiative that includes at least one employee of an academic library in Oregon may be nominated (self–nomination are accepted). Project members do not need to be ACRL-OR members.  The initiative or project that is the basis of the nomination must have occurred in the previous three years.

The award winner(s) will be notified by mid-August.

Contribute to the blog!

ACRL-OR serves a dual role as the Oregon chapter of the Association of College and Research Libraries (ACRL) as well as the Academic Library Division of the Oregon Library Association (OLA).